If you do a quick internet search for "worlds largest pecan" you'll come across two claims to the "largest" title. Neither claims are an actual pecan, but oversize look-alikes fabricated using man-made materials.

The worlds largest pecan replica is located in Brunswick, MO, while the second largest pecan can be found in Seguin, TX. The bronze pecan in Sequin can be found on the lawn of Guadalupe County courthouse. The pecan is described a being the size of a baby carriage and weighing about 1000 pounds. It was built in 1962. It used to hold the title of largest pecan. Then came the massive concrete pecan in Brunswick on U.S. Hwy 24 at James Pecan Farms, Inc. It supposedly was built in the early 1980's by Mr. George James. It is reported to weigh around 12,000 pounds, be 12 feet long, and have a 7 foot diameter. It is a representation of a pecan type, the Starking Hardy Giant pecan, which was discovered by Mr. James. Also of note, Brunswick is considered to be the pecan capitol of Missouri and holds a pecan festival annually. On another note, Pape Pecan company in Seguin, Texas claims to have the World's Largest Mobile Pecan. That is one huge pecan on wheels!!!

The pecan in Seguin has been moved. Our family stopped by to visit it a few years back on a road trip through that area. Check out the video below!

While we are talking about large pecans, I thought the world's largest pecan pie deserves a mention. Okmulgee, OK apparently used to host the annual "Downtown Okmulgee Pecan Festival," up until 2009 or so. Part of the yearly festivities was to cook up the world's largest pecan pie. It reportedly tipped the scales at around 35,000 pounds and was 40 feet in diameter. Now that's a big pie!! Too bad that decades old tradition has ended… 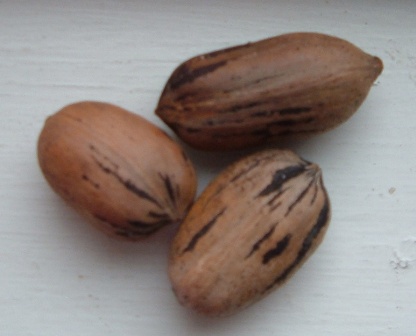 << Return to All About Pecans from Worlds LARGEST Pecan