The United States is home to numerous pecan festivals. They occur all across the country but are mostly concentrated in the South. It only makes sense that such festivites celebrating this American nut would take place in the regions where the pecan tree is most abundant.

In our neck of the woods there is an annual pecan celebration held in Hickman, KY. I've attended it many times, starting in the mid 1990s. In fact, as members of the Fulton County High School Band, Tori and I played trombone at several of the earlier festivals. We were even involved in preparing fall decorations at the park where it is held in East Hickman. We were both members of the FFA and some members were tasked with designing and placing various decorations throughout the park. Most memorable is the year that we were using a large round hay bale to make a "jack-o-lantern" (paint the whole bale orange, then paint a face on it). In the process of unloading the bale, it rolled right over Tori! Fun times… Plus, we have been a part of several other activities held in conjunction with the weeklong festivities. There are always lots of food and plenty of vendors selling all sorts of things. Local organizations and churches set up booths. There has been a great variety of entertainment offered by the festival over the years, ranging from country music acts to impersonators. And of course there are pecan-themed activities and even contests that let local cooks try out their favorite pecan pie recipes in competition. By the way, Hickman is home to a couple of pecan companies and the surrounding area is home to lots of pecan trees, both wild seedling varieties and grafted trees. I believe that the area is ideal for pecan growing because of its proximity to the Mississippi River. The soil and climate of the area is very suitable for growing pecan trees. Therefore, somewhere along the line somebody must have had the idea that Hickman should have a fall festival. We have lots of pecans around so why not call it a pecan festival? It has been a staple in the community for nearly two decades now.

As you can see, our local pecan fest has provided me with many good memories and hours of enjoyment and entertainment. Check out the following list of links. Find a celebration in your area and go have fun and make some memories! 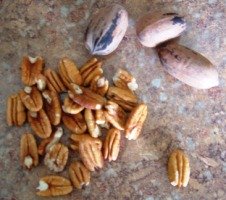 << Return to All About Pecans from Pecan Festivals