Pecan shells are often seen as the "waste" part of the pecan. Most folks usually just throw them out. However, they may provide some value to you in the form of mulch or even for use when cooking/smoking food outdoors.

Commercial pecan processing companies have a large amount of by-product in the form of shells from the nuts they sell. The shells can be piled up and allowed to age. After a period they become mulch (shells will still be visible). This mulch may be slightly acidic, so they are especially good for use around azaleas and blueberry bushes. There isn't much nutrient value in the shells, only just over 1% nitrogen. But, the mulch will provide a good moisture retention layer for you beds. Plus it is a good source of organic matter. The pecan shuck (the casing that surrounds the pecan) can also be used for mulching purposes. They may contain over 4% potassium. Pecan leaves can make good mulch too!

These nut shells can also be used for smoke flavoring when cooking outdoors, on a grill or smoker. Add them to your fire and they will smoke well. They give the meat a sweet flavor. Pecan wood is commonly used for this purpose, so why not use shells for the same effect? As far as I know, there isn't a retail source for these, so you'll have to "produce" them on your own. They can be saved, allowed to dry and then stored for use in smoking your food. You might want to clean them a little before using them. 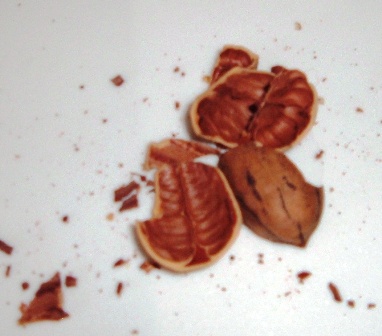 So don't throw out those pecan shells. For most people they are an afterthought in the product of the sought after pecan, but they can be a useful asset!

<< Return to All About Pecans from Pecan Shells